Turkey is ready to do its best in the Balkans and the rest of Eastern Europe to put bilateral and regional relations on a sound balance with the help of historical experience and cooperation. 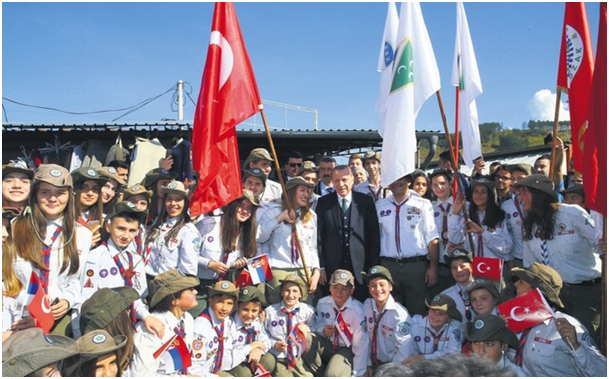 Turkey wants to prevent conflict in the Balkans and the rest of Eastern Europe and promote stronger cooperation between its western neighbors, which have faced significant challenges in the 20th century, by contributing to the creation of a peace belt in the region.

In recent months, our efforts to accomplish this goal have gained momentum, as President Recep Tayyip Erdoğan traveled to Ukraine and Serbia in October. In particular, his visit to Novi Pazar with Serbian President Aleksandar Vučić, which brought together various social groups along with nearly 200 businesspeople, was a groundbreaking initiative that could usher in a new era of cohesion and cooperation between Balkan peoples. Meanwhile, a recent visit by Deputy Prime Minister Hakan Çavuşoğlu, who was born and raised in Western Thrace, to Greece formed a strong basis to promote mutual understanding and to strengthen friendly relations ahead of Erdoğan's trip to the country.

In many ways, the Balkans is a special place. The region's history can be traced back to ancient Greece, the Roman Empire, Byzantine Empire, Habsburg Empire, Ottoman Empire, Russian Empire and a number of other civilizations. Winston Churchill famously said that the Balkans produced "more history than they can consume." Truly, the region, with a high level of ethnic and cultural diversity, produced valuable experiences as well as major conflicts, such as World War I, which changed the course of history.

Today, the Balkans and the rest of Eastern Europe are on the brink of prosperity. Notwithstanding the differences of opinion between the region's numerous communities, socially speaking, there is a thinly veiled cultural pact between them. At this point, our priority must be to strengthen this agreement through economic development and cooperation.

Few parts of the world have experienced as many political, social and economic crises as the Balkans and Eastern Europe did in the past century. As a matter of fact, the region experienced all major developments in history: the Great Migration, feudalism, empires and the rise of nationalism and communism. Sadly enough, the lessons of history have not been learned.

Yugoslavia, which united various ethnic groups under a single flag, could have been successful had it not been for a number of crises that broke out under the yoke of communism. A 2009 report published by McGill University and the World Bank provides valuable insights into the missed opportunities in Bosnia-Herzegovina. From 1992 to 1995, more than 1 million people left the country and some 113,000 people lost their lives. Over four years, Bosnia-Herzegovina lost around $40 billion in gross domestic product (GDP). Together with the destruction in Serbia and Croatia, the region experienced near total collapse.

The Balkans and the rest of Eastern Europe would have been more integrated and competitive if Yugoslavian political elites, which surrendered to ethnic tensions and nationalist fervor after Josip Broz Tito's death, had been able to develop a mode of politics that was inclusive and protective of the country's citizens. Instead, the region continues to struggle with restructuring and problems inherited from Yugoslavia. It is clear that peace can only come to the Balkans and the rest of Eastern Europe with a mindset that is genuinely pluralistic, inclusive and welcoming to all voices.

The Balkans and the rest of Eastern Europe have been disproportionally affected by global instability and uncertainty. Although the region's problems are often blamed on political tensions and historical hostilities, external factors play a major role. In fact, a number of major conflicts that the region experienced in recent decades can be seen as having been exported by the great powers. According to the Robert Schuman Foundation, almost 10 percent of the 100 million casualties of the two world wars were from the Balkans.

Today, the world faces significant challenges once again. Competition among the great powers has become so fierce that the future of smaller countries, which are home to several million people, can be sacrificed for no reason. Needless to say, countries in the Balkans and the rest of Eastern Europe are not immune to such threats. Ukraine, which was caught between Russia and the European Union, is a case in point. Meanwhile, Europe has been unable to prevent the rebirth of ultra-nationalism, as political parties like the Alternative for Germany (AfD) enjoy levels of popularity unprecedented since World War II. In recent years, Erdoğan has been vocally critical of the direction that the world was headed with his mantra that the world is bigger than five.

In the face of pressing problems, Balkan countries must develop a common understanding and create a mechanism necessary to resolve disputes. Otherwise, the region will remain a laboratory, a buffer zone, a backyard or a guinea pig for the great powers.

Problems in the Balkans and the rest of Eastern Europe have taken a heavy toll on the region's economy. According to the World Bank, only two Balkan countries – Greece and Romania – are among the world's top 50 economies. Meanwhile, robust economic growth remains elusive for countries in Southeastern Europe due to political tensions, failure to implement structural reforms and regional disputes. To make matters worse, investor confidence will further decline if such problems are not addressed soon.

Low economic growth leads to high unemployment. In Greece, Macedonia and Bosnia-Herzegovina, the unemployment rate remains above 20 percent. In Croatia, Serbia and Albania, it is over 13 percent. Moreover, unemployment is more common among young people, as only 34 percent of 15 to 24 year olds are employed, which gives them two options to either work in shadow sectors or leave.

The Peterson International Economy Institute recently called the region's economies lethargic. Coincidentally, the main reason for the lethargy was the diminishing labor force. In fact, the working-age population in Eastern Europe shrank by some 10 million from 1990 to 2015. This trend is likely to continue over the next quarter century due to low birth rates and emigration. As of March 2016, 6.3 million Eastern Europeans had moved to European Union countries further west.

Sadly enough, the diminishing labor market renders the Balkans and the rest of Eastern Europe vulnerable to other problems, including radicalization, terrorism, marginalization and xenophobia. At a time when such destructive movements are becoming more popular in Europe, the region's priorities must be defined clearly. Simply put, the region's countries cannot afford to focus all their time and energy on border disputes and political conflicts and let all other issues take a backseat. Instead, they must focus on economic development and keep young people in their own countries by improving infrastructure and cooperation in future-oriented areas like education, healthcare, job creation, production and technology.

Turkey's desire to develop strong ties with the Balkans and the rest of Eastern Europe is hardly new. Since its establishment, our country has signed a number of treaties with regional players to promote stability and deter outside threats, including a 1934 agreement to develop common defense. Following the breakup of Yugoslavia, Turkey sought to restore peace in the Balkans and became the first country to recognize the newly independent states in the region.

Today, Turkey remains active in the region to put bilateral and regional relations on a sound balance with the help of historical experience and cooperation. Over the past two centuries, Turkey, and the Ottomans before it, opened its doors to hundreds of thousands of people from the Balkans regardless of their ethnic backgrounds. A member of the G20, Turkey has the world's 17th and Europe's seventh largest economy. Its annual trade volume with the Balkans, which stood at $3 billion in 2002, has reached $20 billion. Meanwhile, the Turkish Cooperation and Coordination Agency (TİKA), 13 out of whose 58 global offices are located in the region, has been implementing development programs intended to rebuild infrastructure damaged by the wars. Since 2005, the agency provided $1.5 billion of development aid to the region, including assistance provided to flood victims in Serbia, funds made available to restore a church in Bosnia-Herzegovina and agricultural projects in Montenegro.

The Turkish people understand what their neighbors in the Balkans and the rest of Eastern Europe are going through, because they themselves faced similar challenges in the past. Meanwhile, certain powers desperately want to prevent Turkey's integration, economic or otherwise, with neighboring regions. In recent years, our country has been targeted by the Gezi Park protests, the July 15 coup attempt, biased and misleading reports in the international media and violent attacks by terrorist groups such as the Gülenist Terror Group (FETÖ), the PKK and Daesh. At the same time, we have been trying to put out the fires burning in our neighborhood by admitting over 3 million refugees and becoming the world's most generous country in terms of the ratio of humanitarian aid to GDP. Unfortunately, our country's efforts have not been appreciated enough.

Nonetheless, certain critiques of the West from Turkey, which has been a part of the Western bloc and a reliable NATO partner for decades, must not be misinterpreted. The last thing our country wants is instability in the Balkans and the rest of Europe. Simply put, Turkey demands that its relationship with the West become more fair and inclusive. Our approach to the Balkans reflects the same values. At a time when the balances of power shift constantly and new global players emerge, there is a need for a new regional pact. As such, it is time to rekindle the hopes of all people in this part of the world for a better future instead of getting stuck in past grief.